Methane measurements in the UT/LMS

While numerous satellite-based measurements of CH4 have been performed in recent years on a global scale, they leave one important aspect open: to resolve the small-scale variability of CH4 in the UT/LMS. To study these processes, in-situ measurements with high spatial resolution are inevitable.

Such measurements can serve various purposes: (1) to better constrain the global CH4 budget and atmospheric trend, (2) to better quantify the different CH4 sources, but (3) also as a transport tracer of tropospheric air to study exchange processes in the UT/LMS.

We have developed an instrument for in-situ CH4 measurements aboard the CARIBIC passenger aircraft. The instrument is based on a commercial Fast Methane Analyzer (FMA, Los Gatos Research) which was substantially modified for unattended deployment during four long-distance flights per month. The instrument is operational since 2010, having provided CH4 measurements with high spatial resolution (~500 m — 2.5 km) during 85 flights as of December 2012 (Fig. 1).

The instrument makes use of off-axis integrated cavity output spectroscopy (OA-ICOS), i.e. a laser-spectroscopic technique that combines high optical pathlength and good opto-mechanical stability. This part of the instrument is taken from the commercial FMA. A dedicated housekeeping system was added to maintain constant temperatures (cavity, sample gas, etc.) and gas pressure throughout flights of up to ~10 hours duration. Instrument calibration is performed utilizing CH4 measurements obtained from flask samples during the same flights. During the CARIBIC long-distance flights in the UT/LMS we typically achieve an accuracy of better than 4 ppbv (< 2.5 %). The precision is ~2 ppbv for 10 s averaging. Given the total of 85 flights as of December 2012, this marks by far the largest accurate UT/LMS CH4 dataset worldwide. 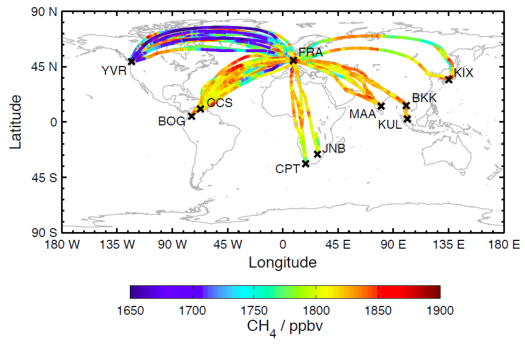