Impact of solar variability on the middle atmosphere

We investigate the impact of energetic charged particles on Earth's atmosphere. These are mainly protons and electrons, though heavier ions from helium to iron can contribute as well. The primary charged particles originate from outside the Earths' atmosphere, sometimes even outside the galaxy. However, main sources are within the Earth magnetosphere (radiation belts), and from the sun.

The sun is a hot rotating ball made out of plasma. It emits a continuous stream of charged particles, the so-called solar wind. A few hours to days after being emitted from the sun, these particles hit the terrestrial magnetic field; most particles are reflected around Earth by the magnetic field, and only a minor portion can enter the magnetic field to form the radiation belts and the aurora. Auroral electrons, the source of the well-known polar lights, are accelerated into the Earth atmosphere along magnetic field lines perpendicular to the Earth surface. Another indirect mechanism of particle precipitation into the atmosphere is due to the compression of the Earths' magnetic field by variations in the solar wind: electrons trapped in the radiation belts are accelerated to energies sufficient to penetrate into the atmosphere at high latitudes. 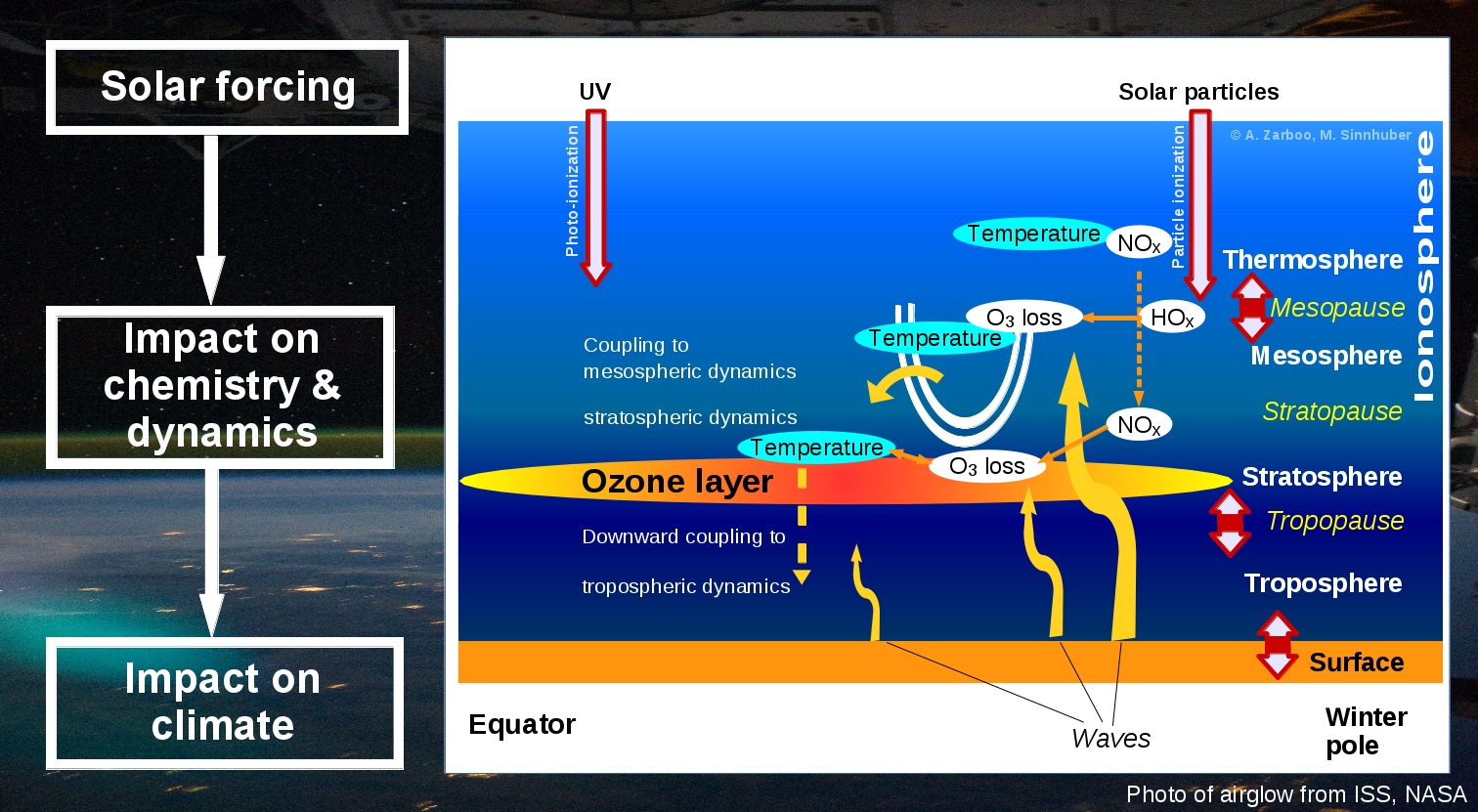 On their way through the atmosphere, particles lose their energy by collisions. This leads to a chain of complex chemical reactions which mostly are however restricted to altitudes above 60 km. Reactive hydrogen compounds (HOx = H+OH+HO2) and nitrogen compounds (NOx = N+NO+NO2) are formed. Despite their low densities, both HOx and NOx contribute to the chemical destruction of ozone (O3) very efficiently. NOx also has a very long photochemical lifetime during night. During polar night, when darkness lasts for weeks to months, NOx can be transported down from its source regions to altitudes of 20-30 km. At altitudes below 50 km, the upper edge of the ozone layer, NOx formed in the aurora thus contributes significantly to ozone loss during winter (though not to the ozone hole, which is even further down). This chain of reactions from NOx production above 60 km, downwelling during polar winter, and ozone loss at the upper edge of the ozone layer, is called the indirect particle impact (see Figure). 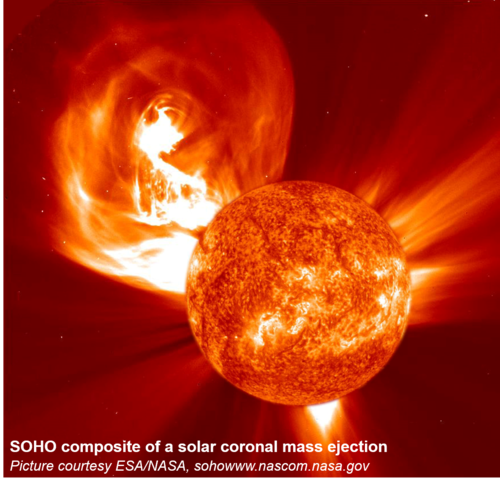 The indirect impact described in the previous paragraph is formed by the continuous solar wind streams, which are modulated by solar activity but always there. When solar activity is very high, much higher plasma streams are emitted by the sun in sporadic and violent events, so-called solar coronal mass ejections (see Figure). Huge plasma clouds can be emitted into interplanetary space, and the solar wind is accelerated to two to three times of its mean energy. The main constituent of the plasma emitted are protons which can precipitate deep into the atmosphere, and can strongly affect chemical composition down to altitudes of ≈40 km. In particular, NOx is formed and ozone loss in the mesosphere (50-70 km) can reach more than 90% within hours. These so-called solar proton events occur sporadically during solar maximum and can not be predicted.

We investigate processes in the mesosphere and lower thermosphere (45 – 150 km) directly related to solar activity. Process oriented models like our one-dimensional ion chemsitry model UBIC are used to test our understanding of processes. The relevance of processes for longer periods of time, and for the global scale is investigated with global three-dimensional chemistry climate models like EMAC/EDITh or 3dCTM.

The impact of solar variability onto the atmosphere is investigated in the projects Solvar and ROMIC-SOLIC.