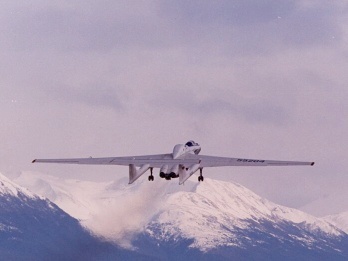 MIPAS-STR is a Fourier transform emission instrument operating in the middle infrared spectral region. The emission method allows limb and upward viewing modes, yielding about 1-2 km vertical resolution below the flight level and mainly column data above. The final result of the measurements are 2-dimensional distributions of the trace gases in an altitude range covering the lowermost stratosphere and the troposphere, a scientifically important region where trace gas measurements are scarce. The MIPAS-STR measurements are used to study the distributions of ozone-relevant trace gases in the Arctic winter stratosphere, vertical redistribution of nitric acid inside the polar vortex, the properties of polar stratospheric clouds and for the validation of correlated observations from aircrafts and satellites.

MIPAS-STR was operated from the M55-Geophysica, a Russian high-altitude aircraft which has been transformed to a scientific platform for earth observation. The unique combination of in-situ and remote-sensing instruments aboard the Geophyisca provided the basis for comprehensive studies of atmospheric chemistry and dynamics and allows for intercomparisons of the results of the individual instruments.

MIPAS-STR has been involved in several national and international projects for the validation of MIPAS-ENVISAT and in the international campaigns SCOUT, AMMA and RECONCILE. MIPAS-STR was furthermore deployed for comparisons with the first observations of GLORIA during the ESSenCe campaign.

For further information on MIPAS-STR, please click on the navigation bar (top).