Our group develops and deploys PTR mass spectrometers for the detection and monitoring of volatile organic compounds (VOCs) like e.g. acetone, methanol or acetonitrile. The first instrument is based on a commercial PTRMS from Ionicon (Innsbruck, Austria) but had to be strongly modified to perform automated measurements on board the CARIBIC passenger aircraft since 2005 including calibration and background measurements. Another newly developed Ultra-Light-Weight PTRMS (ULW-PTR-MS, ~55 kg) - adopted for the first time during the UBWOS  campaign in 2011 - was developed for the HALO  research aircraft. Its first airborne deployment will be during the OMO-EU campaign in summer 2013. A third instrument that is based on the ULW-PTRMS will participate in the MUSICA campaign on Gran Canaria in summer 2013. The PTR-MS technique was developed by W. Lindinger et al.  at the university of Innsbruck, Austria in the 1980s. 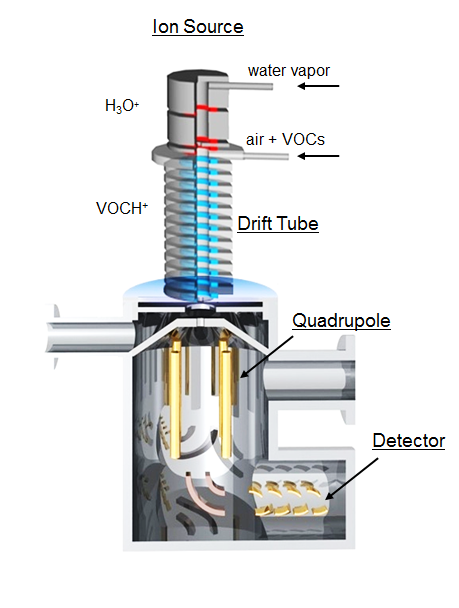 Its function is as follows. Water vapor is injected into a hollow cathode ion source (Fig. 1) where H3O+ ions are produced.  At the entrance of a drift tube (held at ~2.5 hPa) air is introduced and proton transfer between the H3O+ ions and VOCs takes place for VOCs having higher proton affinities than that of H2O (691 kJ/mol), i.e. H3O+ + VOC -> H2O + VOCH+. An electrical field of ~ 60 V/cm guides the ions towards the exit of the drift tube where they enter a quadrupole mass spectrometer (~2 ·10-5 hPa) for detection of the protonated VOCs.

The VOC density in the sample air can be inferred (i) from the measured counting rates [VOCH+] and [H3O+] by using the equation: [VOC+] ~ [H3O+] · [VOC] · k · t where k is the proton transfer reaction rate constant and t the reaction time (~ 100µs) or (ii) by calibrating the instrument with an external gas standard in order to determine a specific sensitivity for a specific compound. Sensitivities are generally given as the signal of VOCH+ ions obtained at a VMR of 1 ppbv (parts per billion by volume: 1·10-9) and normalized to a H3O+ signal of 1·106 counts/s.

Typical detection limits are 10 - 50 pptv (parts per trillion volume) at integration times of 5 s for each mass.

In CARIBIC we are particularly interested in trace gas distributions which can inter alia be used to validate atmospheric models and satellite observations. As an example, see the seasonal variation of acetone relative to the tropopause between ~35°N and 55°N in Fig. 2. It constitutes the first representative distribution of acetone around the mid-latitude tropopause measured onboard aircraft.

Clearly visible are the high values in summer of ~1000 pptv in the upper troposphere, the rapid decrease in the stratosphere, and the low mixing ratios below 100 pptv in the wintertime stratosphere. Based on this distribution and the ones of O3 and H2O (likewise measured by us during CARIBIC), the source of OH in the mid-latitude UTLS is determined due to the photolysis of acetone and ozone.

Further CARIBIC PTR-MS data are used for case studies, e.g. the characterization of biomass burning or anthropogenic pollution plumes, and many other studies. 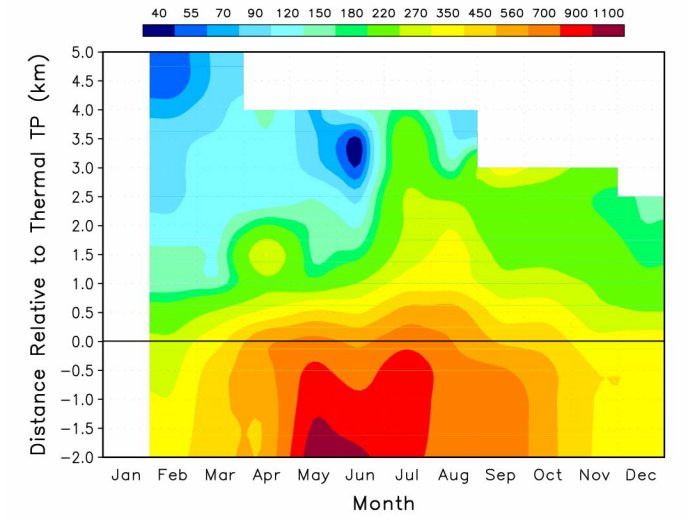 Fig. 2: Seasonal variation of acetone (in pptv, see colorscale) for a range of distances relative to the thermal tropopause.