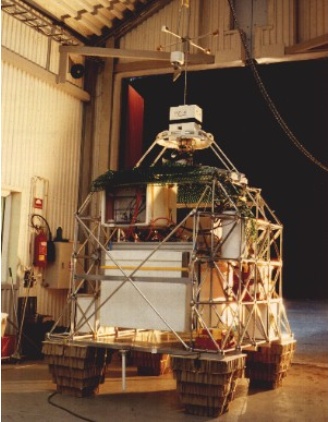 The MIPAS-B2 gondola ready for launch in the balloon
assembly hall at Esrange near Kiruna, northern Sweden
(68°N, 21°E). 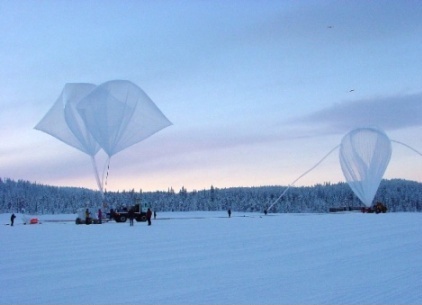 Preparation of a balloon launch of MIPAS-B2 on the Esrange launch pad
in the polar winter. At float the volume of the main balloon is typically
100.000 to 400.000 cubic meters (altitudes between 30 and 40 km). The
main balloon is being inflated by helium flowing through flexible tubes.
Two auxiliary balloons hold the gondola in balance to prevent dragging of
the payload along the ground when the main balloon has been released. 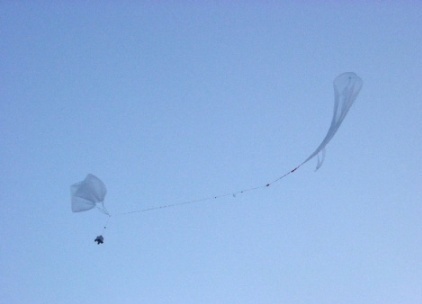 MIPAS-B2 some moments after the launch from Esrange on its way to the
Arctic stratosphere above northern Scandinavia. 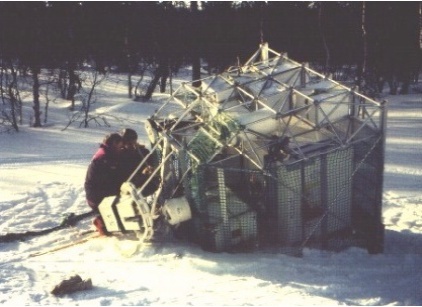 As soon as the observations at float are completed the gondola is
separated from the balloon and sinks slowly down hanging under large
parachutes. The picture shows the MIPAS-B2 gondola after a perfect
landing on a frozen lake in Finland. 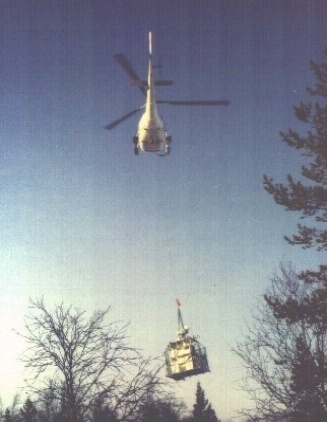 Recovery of the MIPAS gondola by a helicopter operated
by the Swedish Space Corporation (SSC) Esrange. 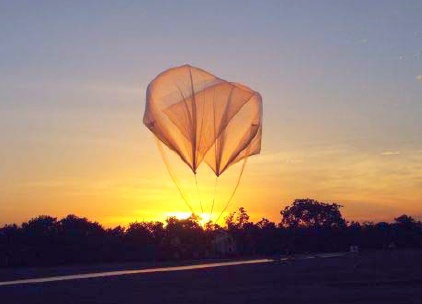 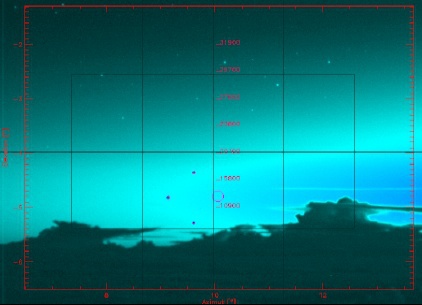 High clouds as seen from the MIPAS-B2 star camera looking to NNE at
about 40 min before sunrise at balloon float altitude on 14 June 2005.
Overshooting cloud tops are at about 12 km, a thin cirrus cloud is at
about 14 km. Higher up, through the clear stratosphere, some stars are
still visible. The three spots forming a triangle are LEDs mounted on the
field stop, the blue circle indicates the optical axis of the instrument. 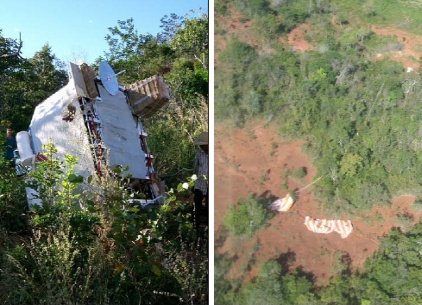 Touch down area of the MIPAS-B2 gondola after the flight from Teresina
on 14 June 2005 at 7°S, 46°W, about 400 km away from the launch site
after a flight duration of about 19 hours. The gondola system and some
instrument parts suffered from the hard landing (up to 48g as indicated
by the shock log), but after a few more days of work the interferometer
was running once again nominally. 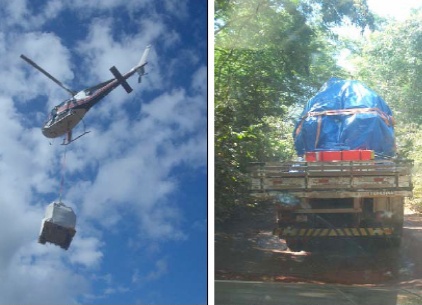 The gondola was rapidly localised since the last part of the descent could
be watched by the helicopter. After recovery and transport back on about
700 km road the equipment returned to the Timon airbase 34 hours after
touch down.