Record low ozone over the Arctic 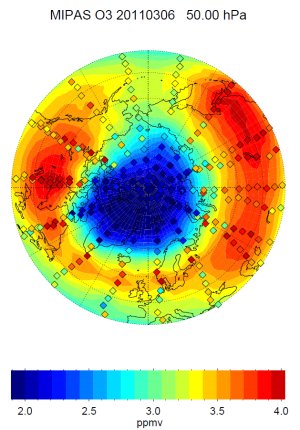 MIPAS ozone measurements at 22 km altitude on 6 March 2011. Over the Arctic there is an ozone hole (blue data points indicate low ozone mixing ratios) as deep as never seen before in the Arctic. MIPAS data analysis at IMK covers not only ozone but a large number of the major chemical agents relevant in the context of ozone destruction.

The polar stratospheric vortex in 2011 is much more stable than usual, leading to much colder temperatures than usual in northern polar winters. This implies more polar stratospheric clouds and thus more ozone destruction. An ozone hole like this is observed each year in the Antarctic, but stronger wave activity in the northern hemisphere usually leads to a displacement and deformation of the polar vortex and thus goes along with less ozone destruction.