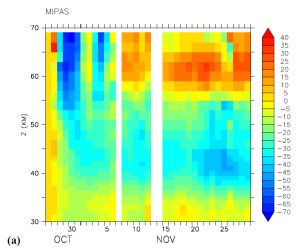 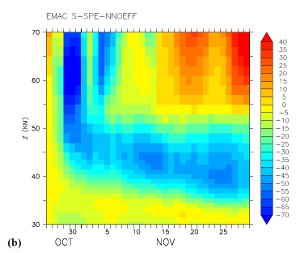 High energetic solar protons from solar flares and coronal mass ejections affect the chemical composition of the Earth's atmosphere in the stratospheric and mesospheric altitude regions by ionization, formation of NOx and HOx, and, subsequently, ozone destruction. The left figure shows MIPAS observations of ozone loss (in terms of percentage ozone change relative to ) during and after the solar proton events over the Northern polar cap (70N - 90N). Initial ozone loss in the mesosphere reaches 70%, mainly due to HOx formation, while longer-term (several days to weeks) ozone loss in the stratosphere is caused by NOx formation and reaches up to 40%. The right figure shows the ozone loss as modelled by ECHAM5/MESSy which has been extended by a module parameterizing the effects of particle precipitation.