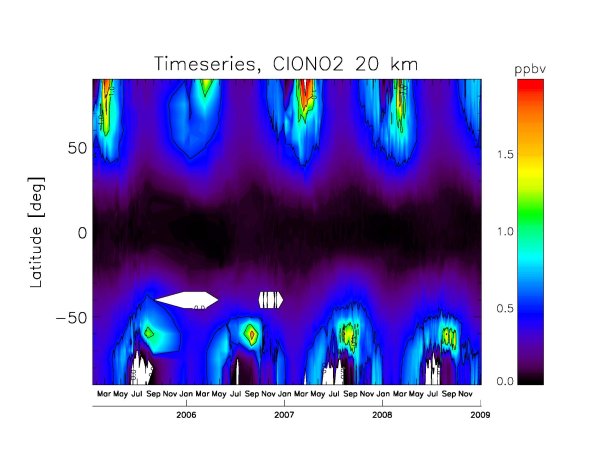 The figure shows the temporal development of ClONO2 as a function of latitude at 20 km altitude, measured by MIPAS.

ClONO2 reaches its maximum in Northern polar spring. Since denitrification is stronger in the Southern polar vortex, and since ozone is largely depleted, leading to low ClO abundances, there is very little ClONO2 in the core region of the vortex there. ClONO2 is formed in the collar of polar vortices rather than the core region. As a consequence, at Southern polar latitudes the region of highest ClONO2 mixing ratios is shifted from the pole towards midlatitudes. Wave activity moving the polar vortex off the pole masks this effect in the Northern hemisphere largely. White areas in southern midlatitudes are due to data gaps caused by regular calibration measurements, while white areas at high southern latitudes are data gaps due to polar stratospheric clouds (PSC).

After a malfunction of the mirror slide the spectral resolution of MIPAS nominal measurements was readjusted. While no operational level-2 data have been distributed by ESA since then, the IMK/IAA MIPAS processor is used to produce distributions of a long list of trace species.