First observations of bromine nitrate in the atmosphere 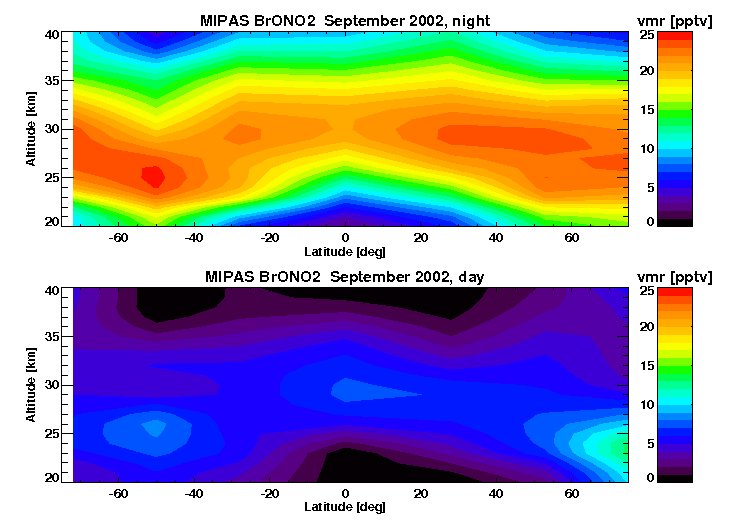 Global stratospheric distribution of bromine nitrate (BrONO2) as measured for the first time by MIPAS/Envisat during night (top) and during day (bottom) in September 2002.

One reason for its higher potential for ozone depletion per atom (by about a factor of 60) compared to chlorine is the considerably faster photolysis of the reservoir species bromine nitrate (BrONO2) compared to that of chlorine nitrate (ClONO2). Captured in these reservoirs, the halogens do not affect stratospheric ozone. In particular, during night BrONO2 is by far the most abundant bromine species and even during day it is second directly after BrO.

While BrO has first been detected in the atmosphere already 20 years ago and ClONO2 even 30 years ago, BrONO2 has not been observed until recently when, in mid-2008, its spectral fingerprint has been discovered in high-resolved infrared spectra measured by the Michelson Interferometer for Passive Atmospheric Sounding (MIPAS) on ENVISAT.

The BrONO2 signature is rather weak so that more than 1000 spectra per latitude bin had to be averaged over the period of one month, which were then analysed by detailed radiative transfer calculations. The position of the spectral feature, its day/night variation and the derived atmospheric concentrations leave no doubt that at last BrONO2 was detected.