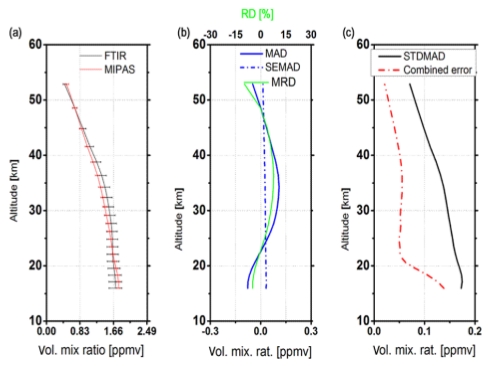 The figure shows in the left panel the comparison of mean MIPAS profiles (red, with standard deviations) of methane to a mean methane profile from ground-based FTIR observations (black, with standard deviations) at Addis Ababa, Ethiopia. The middle panel provides the mean bias (blue), the standard error of the mean (dotted, blue) and the relative difference with respect to the average of the two observation types (green, upper axis). The right panel shows the ex ante estimated combined error (dotted, red) and the standard deviations of the bias (solid black), indicating an underestimation of one or both errors.

The comparison of ground-based and satellite-borne observations is an important step towards validation of both measurement types. In this paper, FTIR observations of methane and nitrous oxide from a new station in central Africa are compared to three different satellite observations: MIPAS, MLS, and AIRS. The observed mean differences are similar for all three satellite instruments, and the figure on MIPAS provides a typical example. While there are differences along the vertical profile, these are almost compensated for the partial column covered by the satellite instruments. The latter qualifies the ground-based observations to be a ground truth site for column measurements of methane and nitrous oxide from space. This is particularly important since ground truth sites in Africa have been rare, while observations at low latitudes are of particular importance.