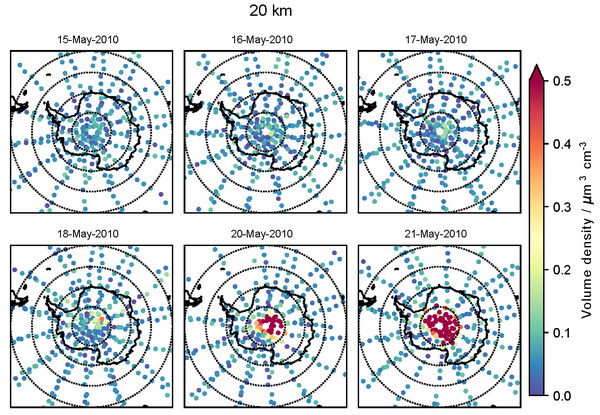 The figure shows the onset of PSC formation of the Antarctic winter 2010 at 20 km altitude during May as observed by MIPAS. The single profile data show very first enhancements of PSC volume densities close to the South pole on 17/18 May 2010, some days earlier than respective observations from CALIOP.

The retrieval of volume density profiles is complicated by the fact that PSCs consist of particles of different composition belonging to different size classes. STS particles are generally smaller than one micrometer, and scattering can be neglected. On the other hand, NAT and ice particles are often larger than 1 μm and, thus, scatter radiation from the troposphere below into the instrument’s line-of-sight in addition to their thermal emission. Further, in many cases not only PSCs of a single homogeneous composition are present within the field-of-view of the limb sounder. This leads to a complex retrieval problem since the measured spectra are not only influenced by the radiative effects of particles with different composition, but also by the different sizes of the different PSC particle types. The retrieved volume density profiles are characterized by a random error due to instrumental noise of 0.02–0.05 μm3cm−3, a detection limit of about 0.1–0.2 μm3cm−3 and a vertical resolution of around 3 km. Comparisons with coincident observations by the Cloud-Aerosol Lidar with Orthogonal Polarization (CALIOP) on the CALIPSO (Cloud-Aerosol Lidar and Infrared Pathfinder Satellite Observations) satellite showed good agreement regarding the vertical profile shape. Quantitatively, in the case of supercooled ternary solution (STS) PSCs, the CALIOP dataset fits to the MIPAS retrievals obtained under the assumptions of small particles. Unlike for STS and NAT, in the case of ice PSCs the MIPAS retrievals are limited by the clouds becoming optically thick in the limb direction. In these cases, the MIPAS volume densities represent lower limits. Among other interesting features, this climatology helps to study quantitatively the onset of PSC formation very near to the South Pole and the large variability of the PSC volume densities between different Arctic stratospheric winters.