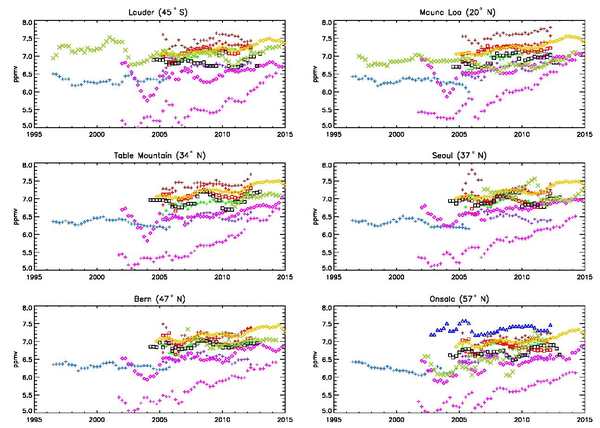 The figure shows the temporal variation of water vapour at 0.46 hPa from several satellite instruments compared to ground-based microwave radiometer measurements at 6 different stations (light green). The satellite data have been selected as co-incidences to the ground-based data within a coincidence radius of < 1000 km, < +- 5º latitude, and < 24 h in time. The satellite data records show a considerable spread with respect to their biases and trends, indicating drift issues in a number of data sets.

The WCRP/SPARC WAVAS-II activity assesses the quality of data records obtained from satellite measurements that where in operation in 2000 and later. In total 40 data records from 15 satellite instruments have been intercompared. Within the comparison to ground-based microwave radiometers the accuracy and stability of the data records in the upper stratosphere and lower mesosphere was assessed. The ground-based microwave radiometers have their highest sensitivity in this altitude range for water vapour measurements.