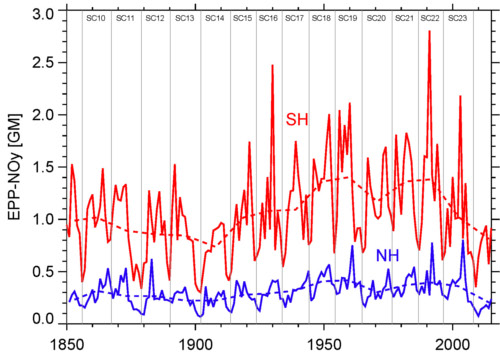 The figure shows the reconstructed stratospheric polar winter deposition of reactive nitrogen NOy (= HNO3 + NO2 + NO + 2*N2O5 + ClONO2 + HNO4) produced by energetic particle precipitation (EPP-NOy) higher up (i.e., in the mesosphere and lower thermosphere) in the Southern (red) and Northern (blue) hemisphere during 1850 - 2015, calculated with a model derived from MIPAS observations. Solar cycle (duration ~ 11 years) average depositions are indicated by the dashed lines. EPP-NOy contributes to ozone destruction and impacts climate, via the heating of the stratosphere by ozone and related circulation changes.

A semi-empirical model for mesospheric and stratospheric NOy produced by energetic particle precipitation (EPP) was derived from MIPAS data. It could be shown that the observed fraction of NOy produced by EPP has a nearly linear relationship to the geomagnetic Ap index when considering some time lag due to transport. For the particular situations of enhanced downward transport during elevated stratopause events a specific parametrization has been developed. Since stratospheric EPP-NOy depositions lead to changes in stratospheric ozone with possible implications for climate, the model presented here can be utilized in climate simulations without the need to incorporate many thermospheric and upper mesospheric processes. By employing historical geomagnetic indices, the model also allows for reconstruction of the EPP indirect effect since 1850. We found secular variations of solar cycle averaged stratospheric EPP-NOy depositions on the order of 1 GM. In particular, we model a reduction of the EPP-NOy deposition rate during the last 3 decades, related to the coincident decline of geomagnetic activity that corresponds to 1.8% of the NOy production rate by N2O oxidation. As the decline of the geomagnetic activity level is expected to continue in the coming decades, this is likely to affect the long-term NOy trend by counteracting the expected increase caused by growing N2O emissions.