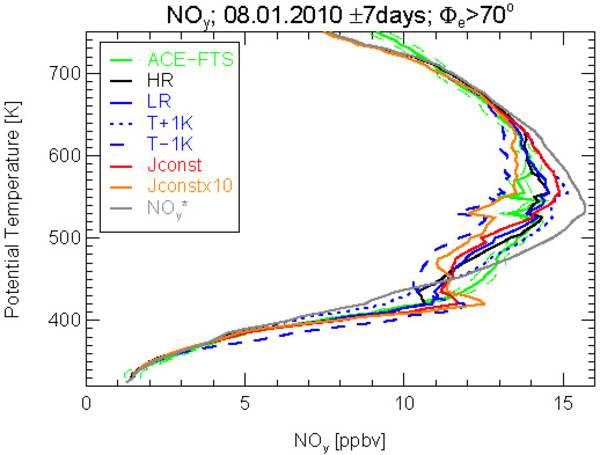 The figure shows NOy profiles as calculated by ClaMS compared to measured NOy from ACE-FTS (green profile) for 2 weeks around 8 January 2010 in the Northern polar vortex core (equivalent latitude > 70o). The CLaMS version initialised with MIPAS N2O, O3, H2O, and HNO3 data on 1 December 2009 with the new saturation-dependent parametrisation of heterogeneous NAT nucleation rates (black and blue, for two spatial resolutions) fit better to the observations than previous calculations. The grey line is the calculated NOy profile without re-distribution of NOy by NAT nucleation and sedimentation.

It has been known for more than a decade that large nitric acid containing particles of over 10 μm diameter can be present in the cold polar stratosphere.These particles are thought to be responsible for the vertical redistribution of NOy in the stratosphere, namely denitrification above altitudes of about 18 km and nitrification below. The process of denitrification is important for ozone depletion as it reduces springtime HNO3 and thus slows down the chlorine deactivation which occurs through the reaction ClO+NO2 at the end of the polar winter.

A new saturation-dependent parametrisation scheme of heterogeneous NAT nucleation rates was included in the CLaMS model, and model runs were initiated with MIPAS observations of N2O, O3, H2O and HNO3 on 1 December 2009. The full Northern polar winter 2009/2010 was simulated, and modeled particle distributions and NOy distributions were compared to independent observations. The simulation shows good agreement of chemical trace species with in situ and remote sensing observations. The simulated polar stratospheric cloud (PSC) optical properties agree much better with CALIOP observations than those simulated with a constant nucleation rate. A comparison of the simulated particle size distributions with observations made using the Forward Scattering Spectrometer Probe (FSSP) aboard the high altitude research aircraft Geophysica, shows that the model reproduces the observed size distribution, except for the very largest particles above 15 μm diameter. The vertical NOy redistribution caused by the sedimentation of the NAT particles, in particular the denitrification and nitrification signals observed by the ACE-FTS satellite instrument and the in situ SIOUX instrument aboard the Geophysica, are reproduced by the improved model, and a small improvement with respect to the constant nucleation rate model is found.