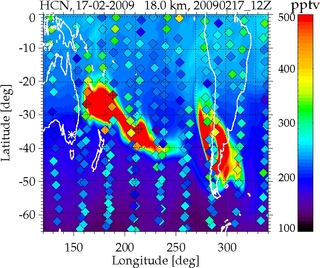 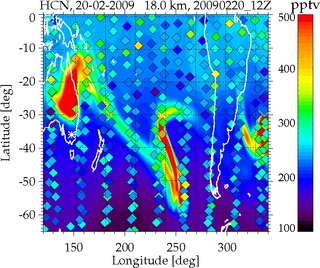 Starting on 7 February 2009, southeast Australia was devastated by large bushfires, which burned an area of about 3000 km2 on this days alone and caused 173 fatalities. This event was extraordinary in terms of atmospheric science, because a large number of combustion products were directly transported into the upper troposphere and after some days even into the lower stratosphere. Various biomass burning products, like HCN, CO, C2H2, C2H6, PAN, and HCOOH, released by the fires were observed by MIPAS and tracked over weeks. The measurements are in very good agreement with the results of a high-resolution run of the Canadian Global Environmental Multiscale Air Quality (GEM-AQ) model.
For further details see http://www.atmos-chem-phys.net/13/1637/2013/acp-13-1637-2013.html