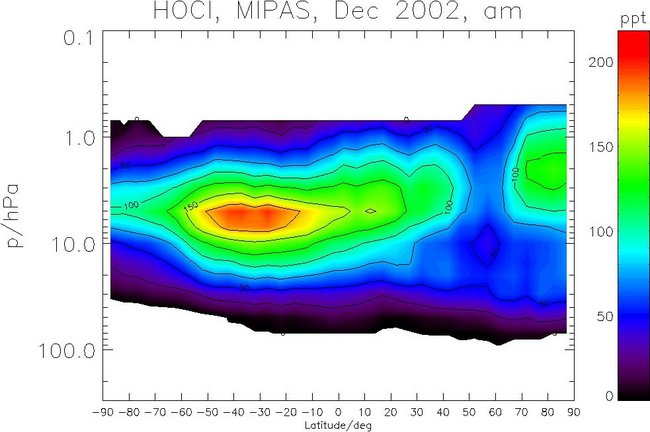 Zonal mean HOCl distribution in December 2002 as measured with MIPAS. Measurements taken during the descending part of the orbit, I.e. morning measurements are shown. The maximum mixing ratios are found in the summer hemisphere. White areas represent altitudes where MIPAS is not sensitive to HOCl.


Monthly zonal mean HOCl measurements by the Michelson Interferometer for Passive Atmospheric Sounding (MIPAS) are available for the period from June 2002 to March 2004. Highest molar mixing ratios are found at pressure levels between 6 and 2 hPa, whereby largest mixing ratios occasionally exceed 200 ppt. The mixing ratio maximum is generally higher at lower altitudes in the summer hemisphere than in the winter hemisphere except for chlorine activation conditions in polar vortices, where enhanced HOCl abundances are also found in the lower stratosphere below about 10 hPa. During nighttime the maximum is found at higher altitudes than during daytime. Particularly low values (below 80 ppt) during daytime are found in subpolar regions in the winter hemisphere where HOCl photolysis is still strong but where HOCl precursors are less abundant than at other latitudes. The Antarctic polar winter HOCl distribution in 2002, the year of the split of the southern polar vortex, resembles northern polar winters rather than other southern polar winters. Increased HOCl amounts in response to the so-called Halloween solar proton event in autumn 2003 affect the representativeness of data recorded during this particular episode. Calculations with the EMAC model reproduce the measured HOCl distribution reasonably well. MIPAS measurements confirm that the reaction rate constants for HO2 + ClO → HOCl + O2 from the most recent JPL recommendation allow much more realistic modelling of HOCl than reaction rate constants from earlier recommendations. Modeled HOCl mixing ratios, however, are still too low except in the polar winter stratosphere where the model overestimates the HOCl abundance. For further details, see