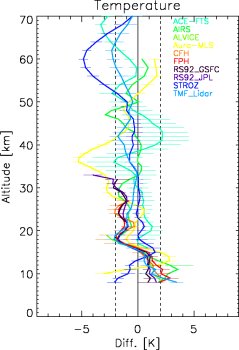 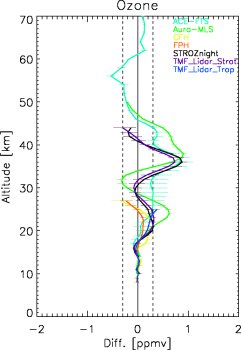 The figures show the mean differences for temperature (left), water vapour (middle), and ozone (right) between MIPAS (V4O) and the respective ground-based, balloon-borne, and satellite instruments which took part in at the MOHAVE-2009 campaign at Table Mountain Facility, Pasadena, California, in October 2009.

IMK/IAA MIPAS observations of temperature, water vapor, and ozone in October 2009 retrieved from version 4.67 level-1b data have been compared to co-located field campaign observations obtained during the MOHAVE-2009 campaign at the Table Mountain Facility near Pasadena, California in October 2009. The MIPAS measurements were validated regarding any potential biases of the profiles, and with respect to their precision estimates. The MOHAVE-2009 measurement campaign provided measurements of atmospheric profiles of temperature, water vapor/relative humidity, and ozone from the ground to the mesosphere by a suite of instruments including radiosondes, ozonesondes, frost point hygrometers, lidars, microwave radiometers and Fourier transform infra-red (FTIR) spectrometers. For MIPAS temperatures (version V4O_T_204), no significant bias was detected in the middle stratosphere; between 22 km and the tropopause MIPAS temperatures were found to be biased low by up to 2 K, while below the tropopause, they were found to be too high by the same amount. Above 12 km up to 45 km, MIPAS water vapor (version V4O_H2O_203) is well within 10% of the data of all correlative instruments. The well-known dry bias of MIPAS water vapor above 50 km due to neglect of non-LTE effects in the current retrievals has been confirmed. MIPAS ozone (version V4O_O3_202) has a high bias of up to +0.9 ppmv around 37 km which is due to a non-identified continuum like radiance contribution. No further significant biases have been detected. Cross-comparison to co-located observations of other satellite instruments (Aura/MLS, ACE-FTS, AIRS) confirmed these findings in general.