Satellite data reveal: The position of the subtropical transport barrier varies with season and QBO cycle 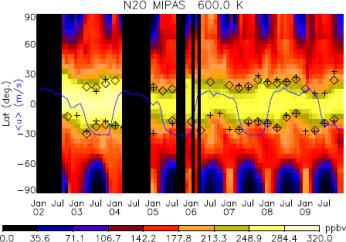 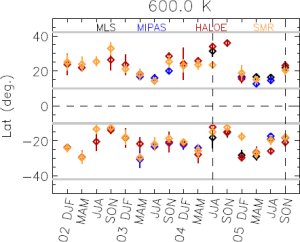 The subtropical transport barrier restricts air exchange between the tropical and the mid-latitudinal stratosphere and is the boundary of the "tropical pipe" in which air is uplifted by the Brewer-Dobson circulation. The left Figure shows the mixing ratios of N2O from MIPAS observations at the 600 K potential temperature level (about 25 km altitude). Already this figures gives an impression of the strong meridional gradient in N2O caused by restricted mixing (yellow to orange). The symbols give the position of the mixing barrier as assessed in this study. It can be shown that the meridional gradients in tracer distributions are strongest where the probability density distributions (pdfs) have their minima. The position of the subtropical mixing barrier determined by searching the minima in tracer pdfs is shown in the right figure. N2O from the instruments MIPAS, MLS, and SMR, and methane from HALOE have been used for this assessment. The four instruments show consistently a strong variation of the subtropical mixing barrier positions with seasons, being furthest north in boreal summer and furthest south in boreal winter. The longer time series from HALOE reveals an overlaid variation with the QBO cycle, too.
For further details see http://www.atmos-chem-phys.net/11/10579/2011/acp-11-10579-2011.html