Validation of the MIPAS HDO dataset with other satellite observations 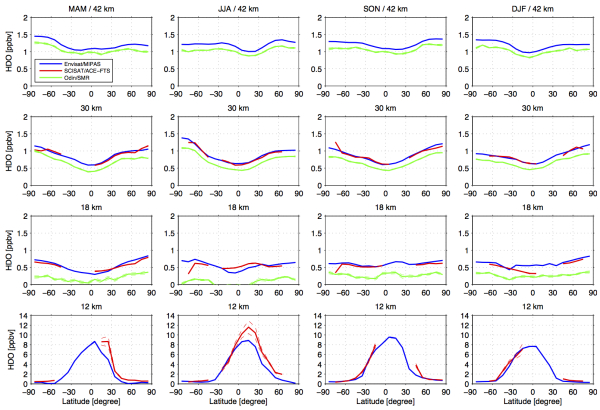 The figure shows zonal means of HDO from observations by Envisat/MIPAS (blue), Odin/SMR (green) and SCISAT/ACE-FTS (red) for all seasons and a small selection of altitudes. The dashed lines indicate the standard error of the data. Above 20 km the three datasets exhibit a high degree of consistency in the observed HDO distribution. Deviations in the volume mixing ratio between MIPAS and ACE-FTS are typically smaller than 10%, while the SMR observations exhibit significantly lower HDO abundances. This bias can basically be explained by uncertainties in spectroscopic parameters. Below 20 km the comparisons reveal the largest deviations between the datasets. A central role here plays the influence of clouds onto the different measurements.

MIPAS observations with full spectral resolution (available throughout the time period June 2002 - March 2004) allow the retrieval of mono-deuterated water vapour (HDO) information in the altitude range from about 10 km to 50 km. To assess the quality of this dataset different comparisons with observations by Odin/SMR and SCISAT/ACE-FTS were performed. The comparisons show that the different observations, overall, provide a coherent picture of the HDO distribution. This work is a preparatory step to further study the isotopic ratio between HDO and H2O. This ratio contains the physical and chemical history of an air parcel and is therefore a valuable tool to determine the entry processes and pathways of water vapour into the stratosphere and to study the stratospheric water vapour budget. More detailed information can be found on the following webpage: http://www.atmos-meas-tech.net/4/1855/2011/amt-4-1855-2011.html