Models for the middle atmosphere

EMAC (ECHAM5 MESSy Atmospheric Chemistry) is a threedimensional chemistry climate model. It consists of the dynamical core ECHAM5 and the Modular Earth Submodel System (MESSy). This model simulates the physics and chemistry of the atmosphere from surface up to about 80 km. Our group uses this model to investigate the influence of solar particles on the state of the atmosphere. Since these also have a strong impact on the atmosphere above, we also work on a vertical extension of the model up to about 180 km altitude.We plan to increase the upper limit to higher altitudes (~400 km). Therefore, several important processes have been implemented, e.g. molecular and turbulent diffusion, ion drag, radiative cooling due to NO, and airglow. To simulate the particle influence in the thermosphere, we have included a parameterisation based on UBIC/3dCTM-results (Nieder et al., 2014). 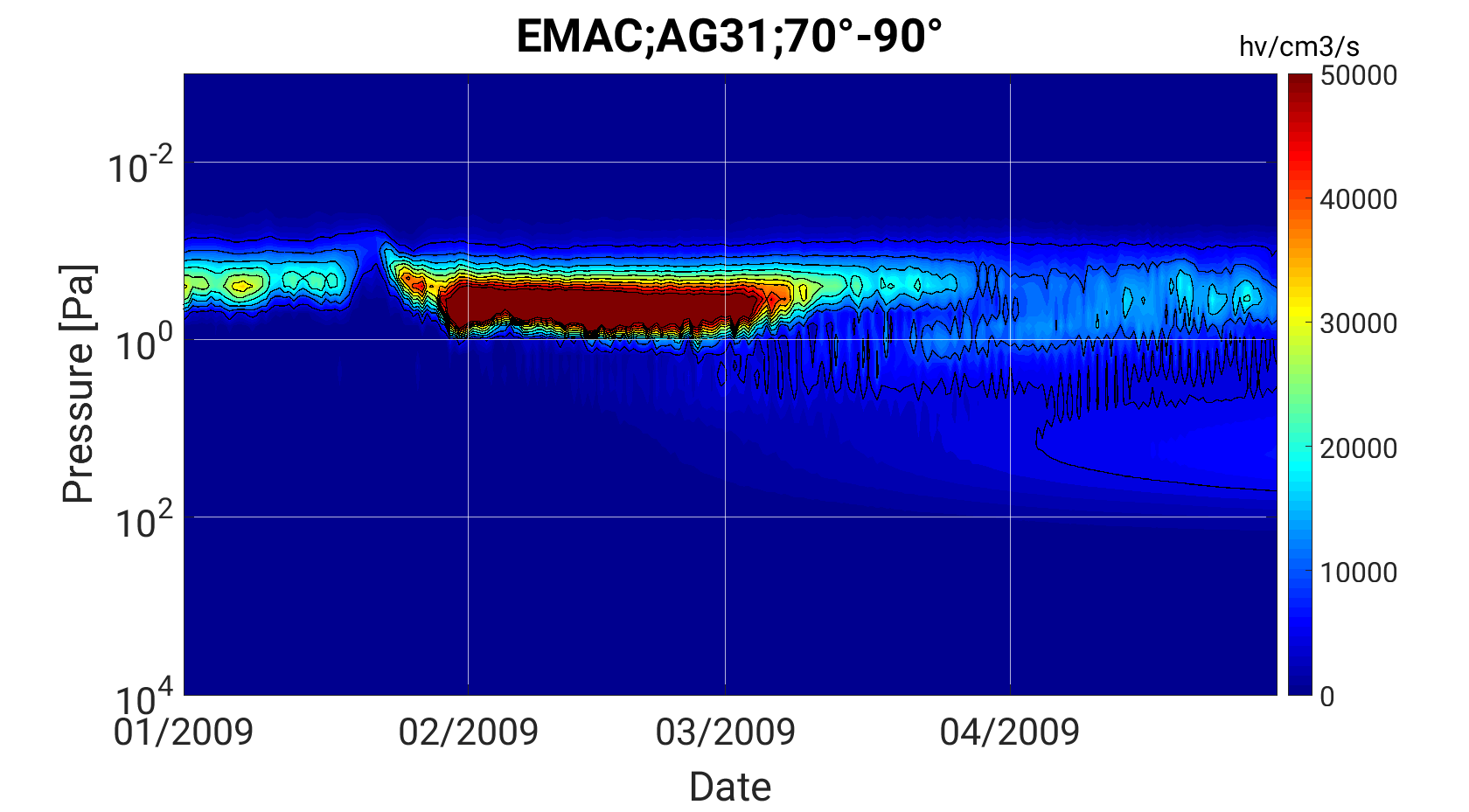 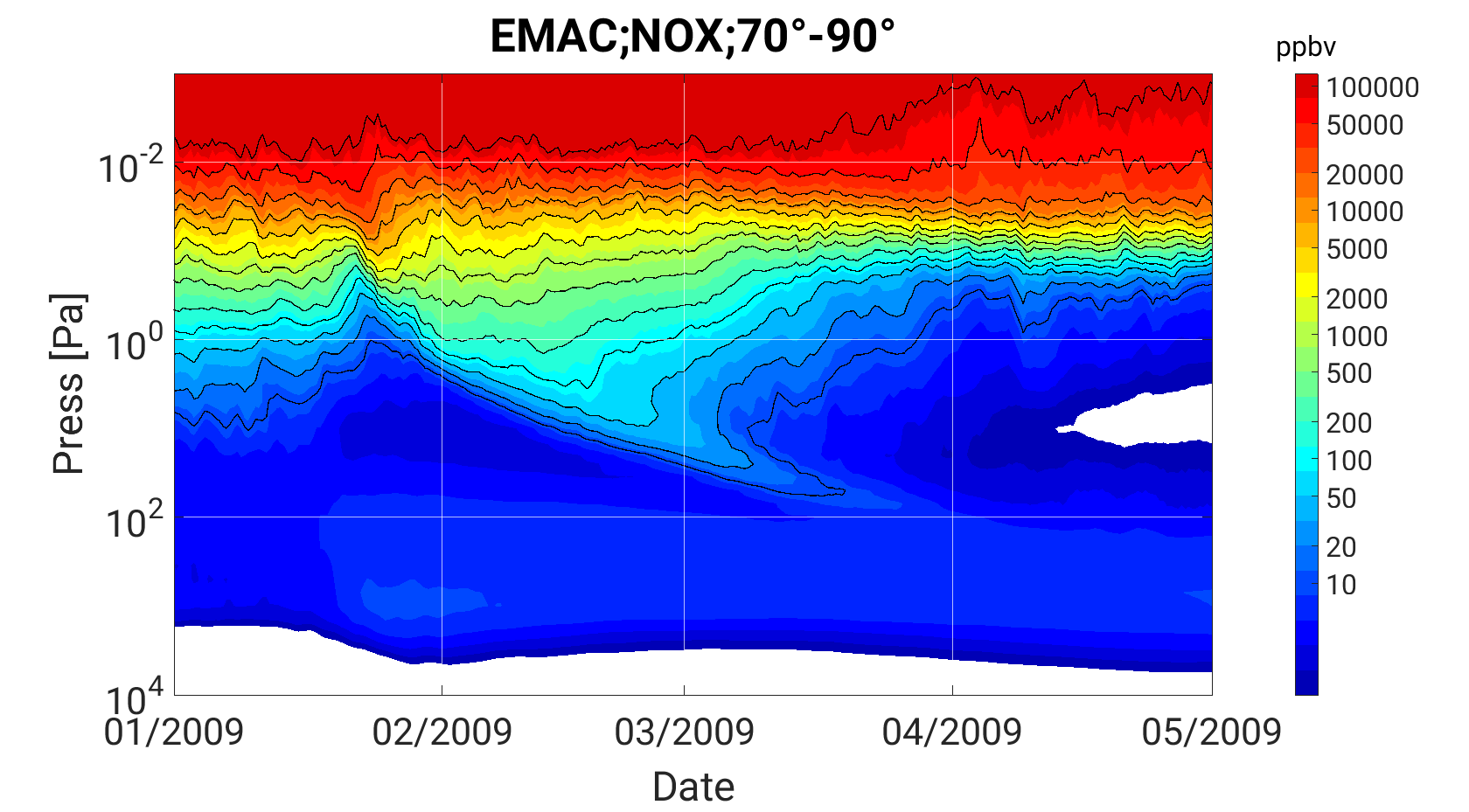 The University of Bremen Ion Chemistry model (UBIC) is a tool to compute the production and loss rates of neutral species by ion chemistry reactions. The model is driven by the ion pair production rates due to particle precipitation, and requires an initial neutral atmosphere as input. It then solves a system of differential equations for both neutral and ionic reactants numerically. The routine of UBIC is based on the fact that ion chemical reactions are extremely fast, and photochemical equilibrium is reached after a comparably short time for the ionic constituents. Hence, UBIC can be called by a superordinate model of the neutral atmosphere, computing a photochemical equilibrium of the ionic constituents, considering the initial atmosphere and the forcing at the starting time. It is assumed that forcing and neutral atmospheric composition do not change significantly while the ion reactions are simulated. UBIC returns formation and loss rates for the neutral species such as NOx (N, NO, NO2) which participate in ionic reactions. These results are then used in the superordinate model of the neutral atmosphere.

UBIC was developed at the Institute of Environmental Physics, University of Bremen, in the research group of M. Sinnhuber, in the framework of the German priority programmes "geomagnetic activity" and CAWSES. 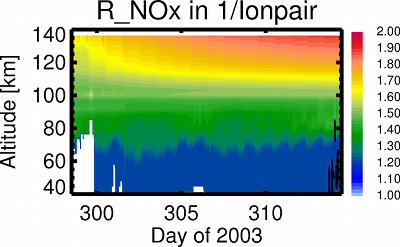 Production rate of NOx in 1/Ionpair as computed with the ion chemistry model UBIC for the solar proton event of October 2003.

The 3dCTM is a three-dimensional chemistry-tranpsort model that was developed at the University of Bremen and is further developed at KIT. The model computes chemical reactions and transport processes in the atmosphere, at an altitude range from the tropopause up to the lower thermosphere (about 10 to 150 km altitude). Mass fluxes are prescribed using LIMA data or ECMWF data, while the chemical reactions are driven by their rate constants and computed in numerical integration. Furthermore, the 3dCTM has capability to compute formation of polar stratospheric clouds (PSCs) and stratospheric aerosols.

The model is able to include anthropogenic emissions by setting up tropospheric mixing ratios of tracers; the transport across the tropopause is computed using the prescribed fluxes. The production of odd nitrogen in the higher model levels is computed using AIMOS ionization rates and parameterized effective production rates, depending on the atmospheric state. 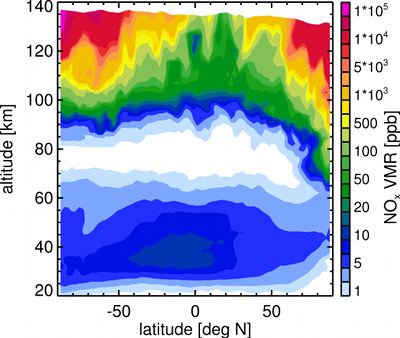 Volume mixing ration of NOx as computed by the 3dCTM. The values are shown for a fixed longitude of 180 degrees, revealing the variation with latitude and altitude.