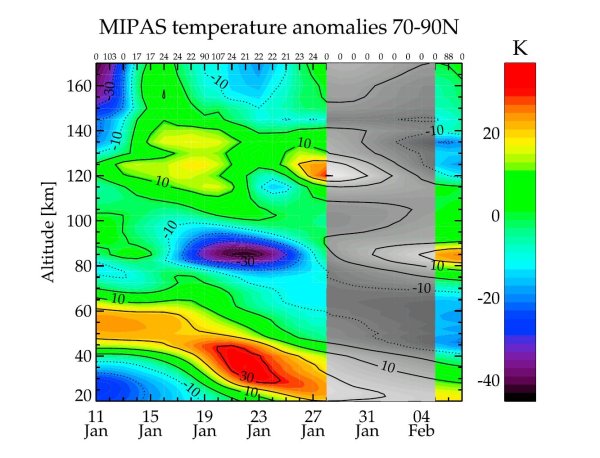 We used temperature data from the Michelson Interferometer for Passive Atmospheric Sounding on board ESA's Envisat satellite to analyze the temperature responses in the mesosphere and thermosphere up to 170 km to a major stratospheric sudden warming (SSW) which occurred in January 2009. The temperature observations show clear signatures of a mesospheric cooling and a thermospheric warming, the latter peaking at 120–140 km in agreement with model predictions. From the analysis of the zonal temperature structure during the SSW a pronounced wave 1 pattern was found in the entire middle and upper polar atmosphere with maximum amplitudes around . In the mesosphere, the wave amplitude is significantly damped. The wave amplification above is most likely produced by in situ forced planetary waves in the mesosphere and lower thermosphere region.

Temperature in the upper atmosphere is retrieved from CO2 lines up to , and above from NO lines under local thermodynamic dis-equilibrium, together with the NO volume mixing ratio.

The observational data have been recorded by MIPAS in its Upper Atmosphere observation mode which covers the altitude range of . Since end of 2007, MIPAS observes the Upper Atmosphere regularly every tenth day, and thus provides monitoring of dynamical processes and the solar impact on the atmosphere.