The MIPAS-B experiment is a cryogenic Fourier Transform Infra-Red (FTIR) spectrometer designed to measure concentration profiles of various trace gases in the stratosphere and the upper troposphere by using the limb-sounding technique from a stratospheric balloon.

The instrument is flown in two different gondolas. The first gondola is a frame construction, developed by the Geneva Observatory, combining high stability and safety with moderate weight and easy servicing. The timber-framed structure allows to include further piggyback instruments. The second gondola is a welded aluminium structure which is relatively small and light-weighted. It has been developed by IMK in order to reduce the total weight of the instrument to below 500 kg which is for safety reasons the weight limit for balloon flights from France. 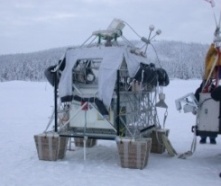 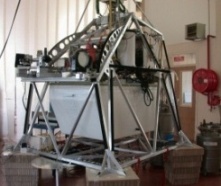 The LOS stabilisation and reference system is based on a miniaturized inertial navigation system with embedded GPS (Global Positioning System) that provides the attitude and heading reference of the instrument frame. The elevation angle is adjusted by a turnable scan mirror which is driven by a control loop using the attitude and heading information. The LOS is stabilised within 300 m (3-sigma) at the tangent point in a distance of up to 600 km. The azimuth is adjusted with a pivot developed by the Geneva Observatory. A CCD star camera takes images of stars in the direction of the LOS that are used as absolute reference. The a posteriori overall knowledge of the tangent altitude is better than 200 m (3-sigma).

The spectrometer consists of a three-mirror off-axis telescope, a double-pendulum interferometer, and a four channel liquid-He cooled infrared detector system. The heart of the instrument is the double pendulum interferometer (see, e.g. Fischer and Oelhaf, 1996), a modification of the classical Michelson set-up. It provides two-sided interferograms with a maximal optical path difference of +/- 14.5 cm resulting in an unapodised spectral resolution of 0.0345 cm-1. The whole spectrometer is cooled to about -55 °C using liquid nitrogen. The four-channel detector system with Si:As BIB detectors allows the simultaneous coverage of the absorption bands of many molecules between 4 and 13.3 µm. 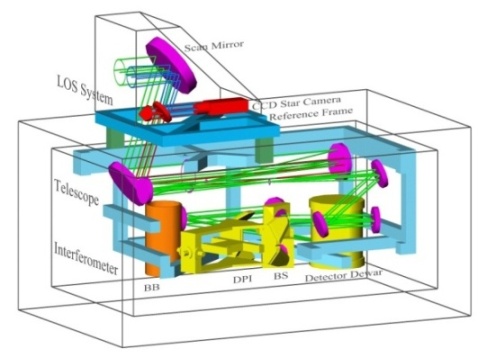 The analogue data of the interferograms is sampled on-board with the full clock rate of about 47 kHz and is converted with a 16 bit AD-converter. After conversion with a 16 bit AD-converter. The data of each channel is numerically filtered, mixed with the information of the other channels and the housekeeping data, and sent to ground via telemetry at a data rate of 500 kbit/s. An uplink connection of 9600 bit/s ensures full commandability of the instrument during flight.

On ground, the raw data is split up again and stored immediately in a data base. At the same time, housekeeping data and interferograms can be viewed and processed to allow on-line evaluation of measured data and of instrumental health.