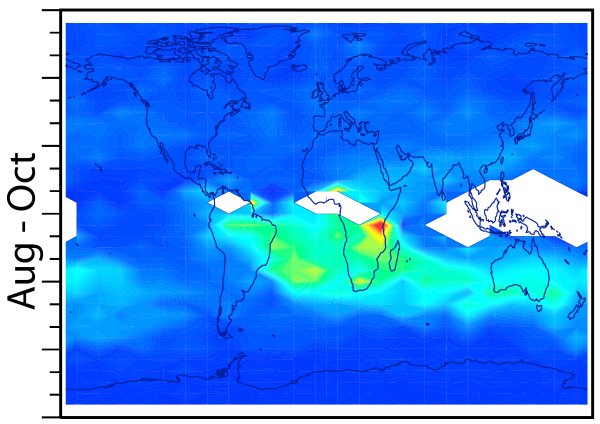 The figure shows the global distribution of formic acid in 10 km altitude for the period August to October 2003. The color scale is from 0 ppt (parts per trillion = molecules of formic acid per 1012 molecules of air) (dark blue) to 300 ppt (dark red). Enhanced mixing ratios are found in the downwind regions of biomass fires in South America and Africa. These results were achieved within a research stay of Prof. Grutter at IMK funded by the Alexander-von-Humboldt foundation.

Organic acids are important in atmospheric chemistry since they contribute to the acidity in precipitation and cloud water, particularly in remote areas. They are also known to play important roles in gas- and aqueous-phase chemistry by their oxidative capacity and, together with other oxygenated organic species, they are present in concentrations that are comparable to those of the nonmethane hydrocarbons. Sources of formic acid in the atmosphere are direct emission, both anthropogenic and biogenic from vegetation, soils and from biomass burning, and by chemical oxidation of hydrocarbons. Estimates for the lifetime of HCOOH range from several hours in the boundary layer to a few weeks in the free troposphere with wet and dry deposition as its primary sinks.
The MIPAS observations highlight biomass burning as a major source of formic acid in the Southern hemisphere upper troposphere. In northern midlatitudes, the annual cycle is dominated by vegetation growth.