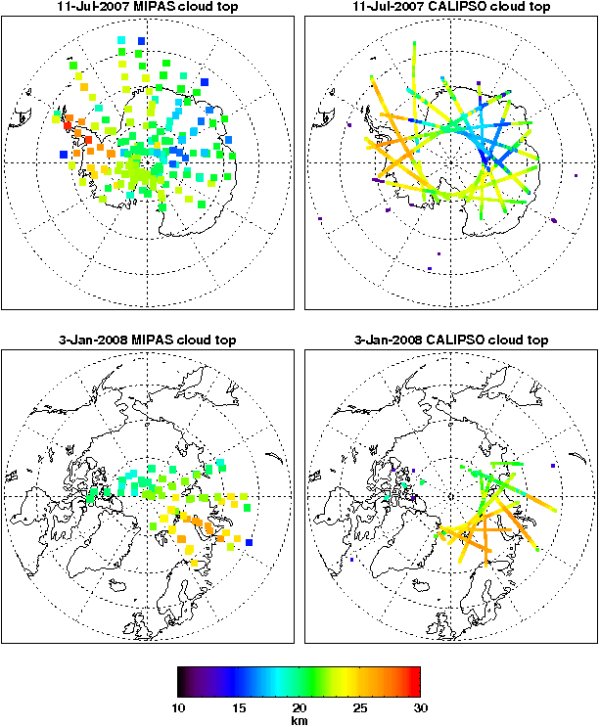 Comparison between MIPAS and CALIPSO polar stratospheric cloud top heights
over the Antarctic (top) and over the Arctic (bottom).

Space based lidars and infrared-limb emission sounders are the only instruments able to observe global distributions of polar stratospheric clouds (PSC) even during polar night. MIPAS limb IR emission and CALIPSO lidar observation of polar stratospheric clouds in the Arctic and Antarctic have been intercompared with respect to their occurrence, top height and composition.

During the middle of the Antarctic season, very good agreement in common PSC detection (around 90%) has been found. At the beginning and end of the Antarctic PSC season and in the Arctic, the frequency of common PSC detection is generally less (60-70%) which can be explained by cloud inhomogeneity and viewing geometry differences. MIPAS PSC top heights are about 0-2 km lower than CALIPSO top heights with larger offsets at higher altitudes. The negative bias of MIPAS PSC top heights can be modeled under the assumptions of limited horizontal cloud extent and a field-of-view dependent sensitivity. The comparisons further show a high degree of consistency between PSC composition derived from the fundamentally different classification approaches of the two instruments.