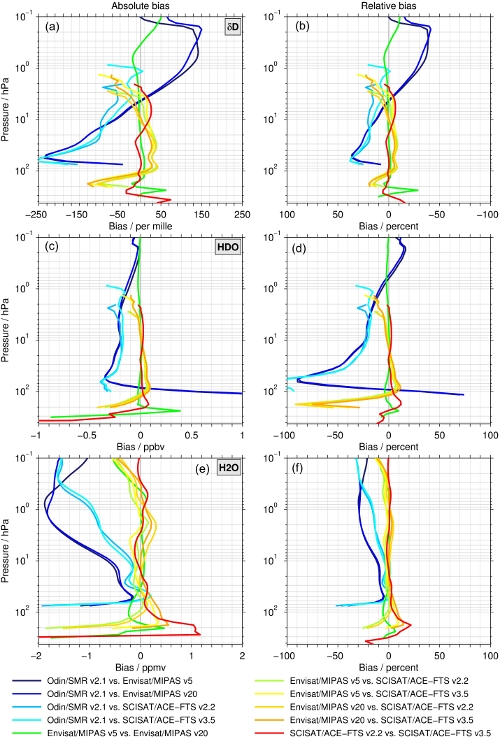 The figure shows the differences of the measured quantities H2O (bottom), HDO (middle) and the derived quantity δD (top) between the satellite instruments Odin/SMR, SCISAT/ACE-FTS and Envisat/MIPAS, on the left in absolute terms, and on the right in relative terms. While ACE-FTS and MIPAS agree reasonably well for all three quantities, at least in the stratosphere, larger deviations of SMR from the other two instruments are found.

δD is a quantity that describes the depletion of heavy water (HDO) from the gas phase for air parcels being transported from the ocean surface upwards into the atmosphere. Depletion happens when water vapour condensates and/or freezes out. Therefore the deuterium depletion tells a story about phase changes of the water vapour in the air parcel on its way from the ocean surface to any point in the stratosphere.

While ACE-FTS and MIPAS agree rather well in their measurements of the basic quantities H2O and HDO particularly in the stratosphere, the derived quantity δD amplifies differences between the two instruments. Orange and light yellow curves show the comparison between the most recent and recommended data sets of the two instruments. SMR deviates considerably from the other two instruments for all three quantities (dark and light blue curves). The biases of SMR are attributed to issues with the calibration, in particular in terms of the sideband filtering, and uncertainties in spectroscopic parameters.