The strength of the Brewer-Dobson circulation of the stratosphere 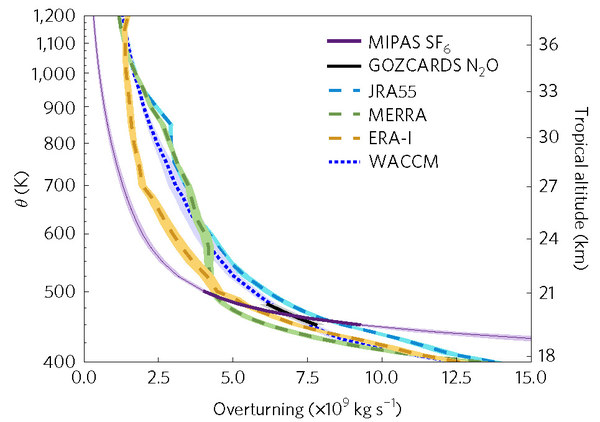 The figure shows the strength of the Brewer-Dobson circulation in the stratosphere for 2007 - 2011 as derived from several data sets: The purple line represents the strength derived from MIPAS SF6 data. The black is based on the merged GOZCARDS N2O data record and covers a small altitude range only. The yellow, blue and green dashed lines rely on various reanalysis data sets, as indicated in the legend. Circulation strengths from the free-running WACCM chemistry climate model are represented by the blue dotted line. The circulation strengths derived from SF6 and N2O satellite observation agree quite well in the altitude range covered by both. However, there are sizeable differences between analyses, model calculations and observations in the higher stratosphere. This has a major bearing on climate studies because climate models predict an increase in the strength of the Brewer Dobson circulation of about 2% per decade, and the identification and calculation of its trends has been a major issue recently. The analysis presented here, however, shows that the mean diabatic circulation strength is not known currently except at one level.

The stratospheric distribution of ozone and water vapour, which is relevant also to surface climate, depends on the Brewer–Dobson circulation. Estimates of its strength, however, are difficult to obtain from observations. Circulation strengths derived from satellite data from 2007 to 2011 are compared to three analysis data sets and the free-running chemistry climate model WACCM. The global mean diabatic overturning mass flux throughout the stratosphere is derived from sulfur hexafluoride (SF6) and nitrous oxide data. These two estimates agree in the lower stratosphere. At a potential temperature level of 460 K, which corresponds to 20 km altitude or 60 hPa in the tropics, the global circulation strength was found to range from 6.3 to 7.6 109 kg s-1. At higher altitudes, only SF6-based estimates are available, and they disagree with the reanalysis data and simulations. While the mesospheric SF6 sink affects the accuracy of related circulation strength estimates, also the reanalyses differ substantially from each other. We thus conclude that the accuracy of circulation estimates at higher stratospheric altitudes is likely to be no better than 100%.

last change: 2017-11-03 KIT – The Research University in the Helmholtz Association