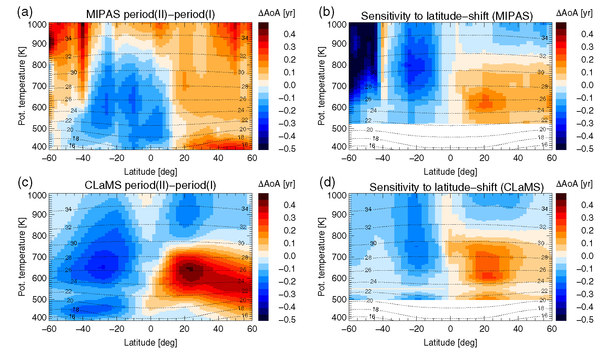 The figure shows the change of mean age of stratospheric air from the 2005-2008 to the 2009-2012 period (left row), for MIPAS (a) and the Langrangian transport model CLaMS driven by ERA-I reanalyses (c). The right row demonstrates how a latitudinal shift of the residual circulation (i.e. the latitudinal positions of the subtropical mixing barriers and the surf zones) affects the altitude-latitude distribution of mean age of air (the difference between the shifted and the original 2005-2008 distribution is shown). The shifts were determined from changes in the subtropical mixing barrier positions derived from N2O tracer pdfs.

The hemispheric asymmetry has been traced back to a (less than) decal natural variability of the atmosphere, mostly not included in CCM runs. After correcting for the shift effect the mean age of air trends derived from MIPAS are largely symmetric to the equator and negative up to 40 degrees N/S and 800K, in consistency with many long-term model calculations.

last change: 2017-09-29 KIT – The Research University in the Helmholtz Association