How to get the best out of four MIPAS processors 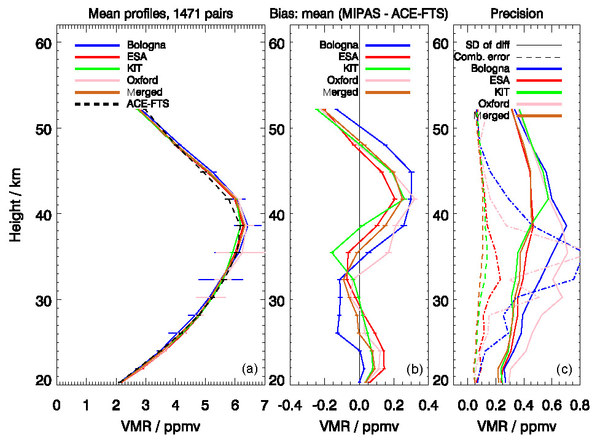 MIPAS ozone distributions are provided by four independent data processors. Since some of these use different spectral intervals for analysis, redundant ozone distribution contain partly independent information which can be taken advantage of in data merging. The left panel shows the average parent profiles, the average merged profile, and, for reason of comparison, averaged collocated ACE-FTS profiles. The middle and right panels show the biases and the standard deviation of the differences with respect to ACE-FTS, respectively.

The merging is carried out as a weighted mean of the four parent data sets, where the weights of each parent data set is controlled by the respective retrieval error covariance matrix. The parent data sets are not fully independent because some error sources affect all four data sets similarly. This difficulty is overcome by the use of a data error covariance matrix which allows for inter-processor covariances. While theoretically the merging is expected to improve the precision but not the bias, at many altitudes the merged profile has a smaller bias with respect to ACE-FTS than the parent profiles. The careful reader will notice that the precision is at some altitudes worse that that of the best parent dataset. This is information-theoretically impossible and hints at deficiencies in the error estimation of at least one of the parent data sets.