While lightning and polar lights are probably the best-known light phenomena in the atmosphere, for our research the atmospheric airglow is of greater interest. Airglow is generated in two steps. In the first instance, photochemical or physical processes lead to the excitation of atoms and molecules, meaning that these atoms and molecules have more energy than in their normal (=ground) state. In the second step, the excited air compounds release their excess energy via the emission of light. The corresponding glow is the atmospheric airglow. Depending on which compounds have been excited, the airglow can be green (atomic oxygen), orange (sodium), red (atomic oxygen), or in the infrared spectral range (molecular oxygen, OH-molecules, potassium). 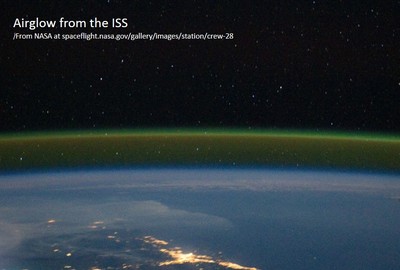 In contrast to the polar lights, the airglow is not restricted to certain regions but is a global phenomenon which occurs throughout the year. The altitude region between 80 km and 110 km is of particular interest for our research group.

The atmosphere from 80 to 110 km is generally scanned either by in situ measurements or by remote sensing. The former one are, however, very expensive, and consequently very rare. Ground-based remote sensing methods provide a high temporal resolution and are less expensive but the global network shows large gaps above the oceans as well in deserts and the polar regions. Thus, for global coverage throughout the year, we use satellite observation.

In our group, we focus on the satellite measurements obtained from the instruments SCIAMACHY and SABER. Though these instruments do not directly measure all parameters of interest, these parameters, like e. g. air temperature, atomic oxygen in its ground state (O3P), or heating rates can by derived indirectly from atmospheric airglow by applying zero- or one-dimensional models.

We focus on airglow observations which originate from molecular and atomic oxygen as well as from OH molecules. The derived trace gases, O3P in particular, play an important role in the mesosphere and lower thermosphere since they strongly affect exothermic chemical reactions and the radiation and energy budget, consequently affecting air temperature. The impact of temperature variations and the coupling mechanisms between the individual atmospheric layers is investigated in more detail by using the global 3-dimensional chemistry-climate-model EMAC/EDITh.

The airglow measurements and the associated model studies are performed in the frame of the projects Oxygen in the MLT-Region and ROMIC-MesoEnergy.