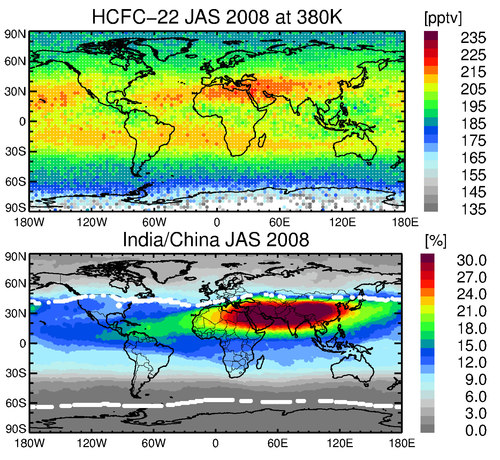 The upper figure shows the distribution of HCFC-22 at 380 K measured by MIPAS for July, August, and September 2008. To improve the measurement density of HCFC-22, multiple days of measurements are synoptically interpolated through CLaMS trajectory calculations. The lower figure shows the contribution of the emission tracer for India/China at 380 K in July, August and September 2008 from respective CLaMS calculations. The climatological isentropic transport barriers of 7.2 PVU (northern hemisphere) and −11.5 PVU (southern hemisphere) at 380 K are shown as thick white dots. Two transport pathways out of the Asian monsoon anticyclone, one to the east along the subtropical jet, and the other to the west into the tropics, are identified.

As demonstrated by Chirkov et al., 2016, HCFC-22 is a very good tracer for emissions in South-East Asia because the worldwide production of HCFC-22 is nowadays almost exclusively confined to this region. It is therefore advantageous to use measured HCFC-22 distributions within emission studies where the fate of pollutants emitted from these areas is analysed. In this study here, global simulations with the Chemical Lagrangian Model of the Stratosphere (CLaMS) using artificial tracers of air mass origin were used to analyze transport pathways from the Asian monsoon region into the lower stratosphere. In order to ease the comparison, the measurement density of HCFC-22 was improved by synoptically interpolating multiple days of measurements through CLaMS trajectory calculations. For each day in JAS 2008, trajectories were computed from the time of measurements in a time window of 5 days (i.e. −2 and +2 days) to 12:00 UTC of the selected day. Subsequently, the mean HCFC-22 values are calculated on a 3◦ × 3◦ latitude-longitude grid between 370 and 390 K.