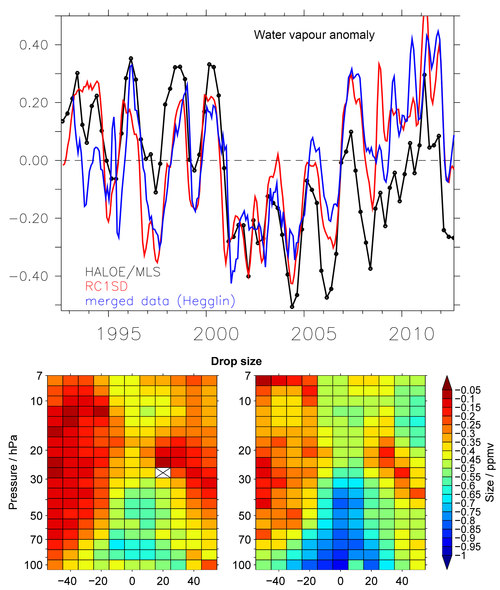 The upper figure shows the anomaly of water vapour with a pronounced drop in the year 2000 as a near-global mean (60S-60N) at 83 hPa from combined HALOE/MLS observations (black), EMAC model simulations (red), and another merged satellite data set (blue). The model simulation is a nudged hindcast run for the years 1980 - 2012 with SSTs from ERA-Interim data. Model prognostic variables (vorticity, divergence, the logarithm of the surface pressure, the temperature, and additionally the mean temperature – wave number zero in spectral space) are nudged by Newtonian relaxation towards ERA-Interim reanalysis data. The lower figure shows the strength of the drop (amplitude, in ppmv) as derived from the model simulations (left) and from MIPAS observations (right) as a function of altitude and latitude.

Sensitivity runs with EMAC in various settings reveal that the correct simulation of QBO and ENSO effects on the atmosphere are key to the explanation of the water vapour drop.

Driving forces for this significant decline in water vapour mixing ratios are tropical sea surface temperature (SST) changes due to a coincidence with a preceding strong El Niño–Southern Oscillation event (1997/1998) followed by a strong La Niña event (1999/2000) and supported by the change of the westerly to the easterly phase of the equatorial stratospheric quasi-biennial oscillation (QBO) in 2000. Large negative water vapour declines are also found in other years and seem to be a feature which can be found after strong combined El Niño/La Niña events if the QBO west phase during La Niña changes to the east phase.