Simulations of the isotopic composition of stratospheric water vapour 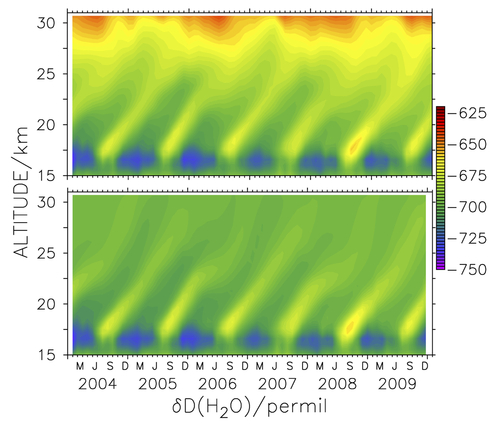 The figure shows the temporal development of the isotopic ratio between HD16O and H216O (δD) in the tropical lower stratosphere for two different simulations. The upper panel shows the standard simulation that contains all processes that are relevant for the isotopic ratio. Clearly the tape recorder signal can be observed, visible as of tilted stripes of green and yellow colour. This phenomenon is in particular known from H216O observations and describes the influence of the tropical tropopause temperatures onto stratospheric water vapour. The existence of such signal even in the isotopic ratio is an important indicator for the relative importance of different processes that contribute to the transport of water vapour through the tropical tropopause layer into the stratosphere. So far the signal has been analysed only based on observations. Those exhibited very different results which are debated correspondingly. The lower panel shows the results of a simulation in which the contributions of methane oxidation onto the isotopic ratio were neglected. These reactions are the main in-situ source of water vapour in the stratosphere. The comparison of the two simulations exhibits that the oxidation of methane clearly attenuates the tape recorder signal above 25 km and even overshadows it.

Recently a water vapour isotopologue module (H2OISO) has been developed for the EMAC (ECHAM MESSy Atmospheric Chemistry) climate chemistry model. This module comprises an additional hydrological cycle that considers the fractionation processes for H216O, HD16O and H218O both in the troposphere and stratosphere. The coverage of the latter region plus an advanced handling of the tropical tropopause layer make this module quite unique. 20 years of simulations have been utilised to study the variations in H216O and the isotopic ratio between H216O and HD16O (δD). This ratio is sensitive to the chemical and physical history of air parcels providing additional informations to constrain the stratospheric water vapour budget. The studies showed a clear influence of methane oxidation on the tropical tape recorder. Focusing on the boreal summer signal of this phenomenon the simulations indicated contributions from the transport of air from the troposphere and in-mixing of old stratospheric air from the mid-latitudes. For the first part ice lofting within the monsoon systems exhibited a significant role.