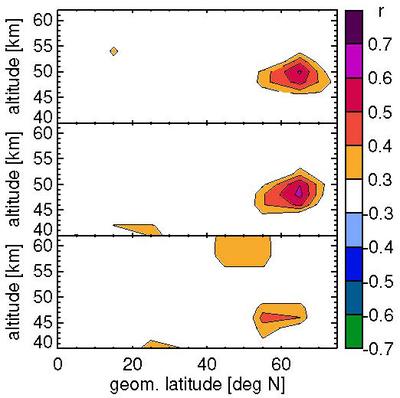 Mesospheric NO2 concentrations vary according to the 27-days cycle of solar rotation. This affects solar wind and geomagnetic activity, the latter being quantified with the Ap index. The panels of the figures show the correlation coefficients between Ap and NO2 variations, with a time lag of 0, 1, and 2 days (top to bottom panels).

In order to remove perturbations in the NO2 time series due to seasonal and other longer-term variations, MIPAS NO2 measurements were analyzed by means of superposed epoch analysis. To distinguish the geomagnetic effects on NO2 from those caused by variation of UV radiation was a particular challenge.