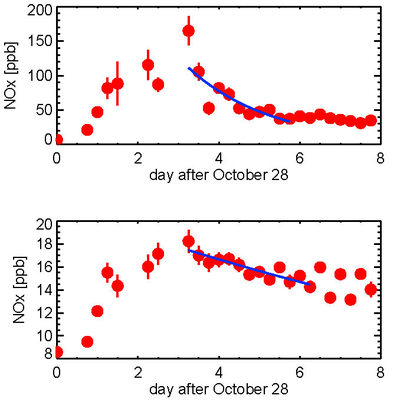 The solar proton event in autumn 2003 generated huge amounts of NOx in the atmosphere. In cooperation with the Helmholtz Young Investigators Group "Solar variability, climate, and the role of the mesosphere/lower thermosphere" and the Instituto de Astrofísica de Andalucía, the production rates of NOx due to ionization and its lifetimes were studied. The figure shows time series of NOx between 50 and 90 degrees N at 62 km (top) and 45 km (bottom).

Lifetimes were estimated for altitudes between 44 and 64 km and were found to be two days at 64 km and 20 days at 44 km. Photochemical loss is nearly negligible at 44 km while it makes up 45% of the total local loss (photochemical plus transport plus mixing) at 64 km. Effective production NOx rates were found to be altitude dependent. They range from 0.2 NOx molecules per ion pair at 44 km to 0.7 at 62 km.