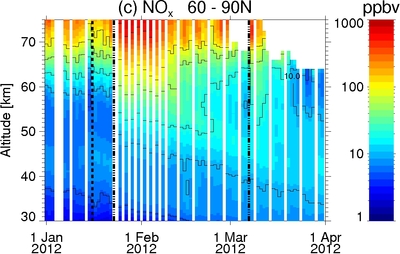 On 23-30 January and 7-15 March 2012 there happened two major solar proton events. During this time, MIPAS monitored atmospheric temperature and composition (O3, CO, CH4, NO2, NO, HNO3, N2O5, HNO4, ClONO2, N2O, and ClO are relevant in this context) with global coverage. The figure shows the temporal evolution of NOx (NO+NO2) over altitude. The direct chemical effect in the stratosphere is superimposed by subsidence of NOx-rich air from above. The dashed-dotted lines are the onsets of the SPEs, while the dotted marks a stratospheric warming.

In the Northern Hemisphere, the January solar proton event (SPE) started at the end of a polar stratospheric warming period. The SPE effect is superimposed by large-scale subsidence of mesospheric NOx-rich air, which partly masks direct chemical SPE effects. SPE-induced NOx increases by 5, 20, 50 and 100 ppbv at altitudes of 50, 57, 60 and 70 km, respectively, are observed during the January SPE, and by 2, 5, 10, 20, 30, and 35 ppbv at altitudes of 47, 50, 53, 60, 63 and 66 km, respectively, during the March SPE. SPE-related ozone loss is clearly observed in the mesosphere, particularly in the tertiary ozone maximum. A sudden short-term HNO4 increase immediately after the January SPE hints at SPE-triggered HOx chemistry. In the Southern Hemisphere, a large NOx response is observed (increases by 2, 5, 10, 20, and 30 ppbv at 52, 56, 59, 63 and 70 km in January and 2, 5, 10, 20, 30, 35 ppbv at 47, 50, 53, 60, 63 and 66 km in March), while the effect on other species seems much less pronounced than in the Northern Hemisphere. SPE-related destruction of mesospheric ozone in the Southern Hemisphere was much more pronounced after the March SPE than the January SPE but in both cases ozone recovered within about a day.
For further details see http://onlinelibrary.wiley.com/doi/10.1002/grl.50119/abstract