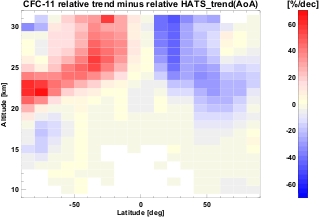 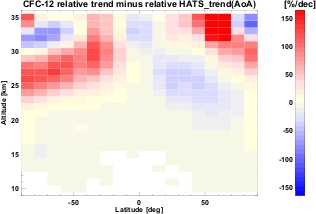 MIPAS is one of the few instruments which are able to observe CFCs in the stratosphere. A 10-years data record of CFC-11 and CFC-12 has recently been generated and analyzed regarding the temporal and latitudinal variations of the freons. As expected, seasonal and QBO-driven variations were found. In the UTLS the linear trends over the 10-years observation period were always negative, consistent to ground-based trend observations, and as expected from the reduced emissions in response to the Montreal protocol. In the middle stratosphere, however, the trends do no longer follow the trends from ground-based observation, even if the mean age of stratospheric air is taken into account which delays the switching point from a positive to a negative trend by some years. Both stronger negative as well as less negative and even positive trends are found. These findings can only be explained by a change in stratospheric dynamics, which affects the shape of age of air spectra or vertical mixing patterns. At the same time, the CFC-11 and CFC-12 data record offers the opportunity to study changes in stratospheric dynamics over the last years.
For further details see http://www.atmos-chem-phys.net/12/11857/2012/