LIMS measurements revisited: EPP effects on stratosphere in winter 1978-1979 are typical for Arctic 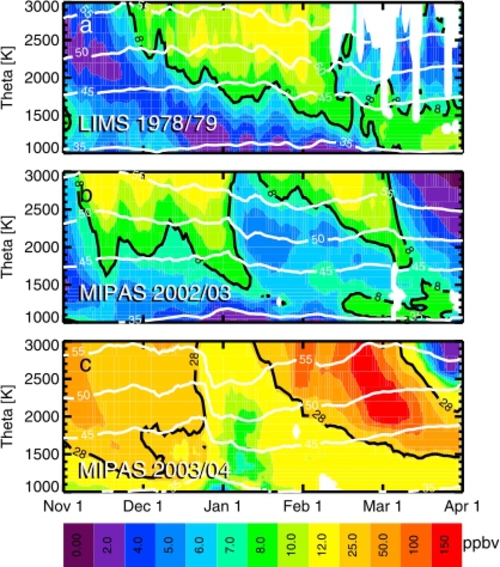 The Limb Infrared Monitor of the Stratosphere (LIMS) measured polar stratospheric enhancements of NO2 mixing ratios due to energetic particle precipitation (EPP) in the Arctic winter of 1978–1979. Recently reprocessed LIMS data are compared to more recent measurements from the Michelson Interferometer for Passive Atmospheric Sounding (MIPAS) and the Atmospheric Chemistry Experiment Fourier transform spectrometer (ACE-FTS) to place the LIMS measurements in the context of current observations. The amount of NOx (NO + NO2) entering the stratosphere that has been created by EPP in the mesosphere and lower thermosphere (EPP-NOx) has been quantified for the 1978–1979 and 2002–2003 through 2008–2009 Arctic winters. The NO2 enhancements in the LIMS data are similar to those in MIPAS and ACE-FTS data in the Arctic winters of 2002–2003, 2004–2005, 2006–2007, and 2007–2008. In the winters 2003-2004, 2005-2006, and 2008-2009, enhancements were larger due to unusual dynamic situations. These results highlight the importance of the timing of the descent in determining the potential of EPP-NOx for reaching the middle stratosphere.