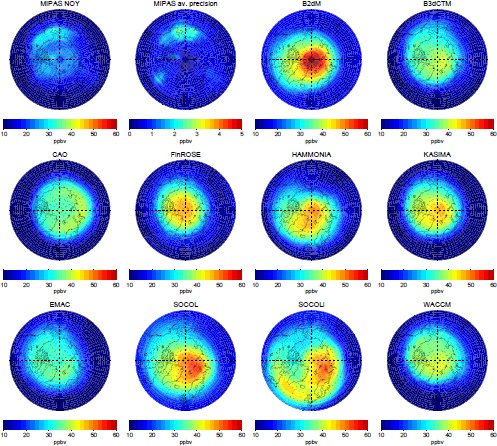 The figure shows the distribution of NOy (the sum of NO, NO2, HNO3, ClONO2, N2O5, and HNO4) at the pressure level of 1 hPa during the solar proton event on 30 October to 1 November 2003, as observed by MIPAS (first two panels) and modeled by 10 different atmospheric models. Although the generation of NOx by high-energetic protons was believed to be well understood, and all involved models used the same ionization rates as input to their model calculations, the modeled NOy distributions differ widely among each others and with respect to MIPAS observations. The differences were found to be related to the realization of transport acting on a very short timescale in the models.

Within a cooperative effort of the international community interested in the effects of "High Energetic Particle Precipitation in the Atmosphere" (HEPPA) the impact of the 2003 "Halloween" solar proton event on the chemistry of the middle atmosphere was studied. Results of 10 different atmospheric models and observations of the chemical composition of the stratosphere and mesosphere as provided by MIPAS were intercompared to improve our understanding of the solar variability on atmosphere and climate. For further details see http://www.atmos-chem-phys.net/11/9089/2011/acp-11-9089-2011.html