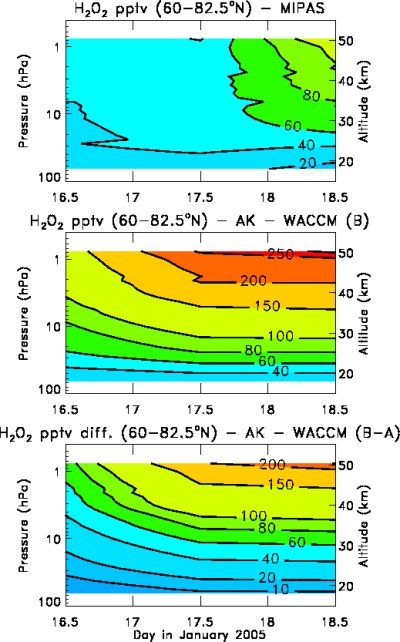 The Figure shows the evolution of the mean H2O2 atmospheric mixing ratio profile between 60 and 82.5 N in the stratosphere and lower mesosphere during the solar proton event (SPE) of 16 - 21 January 2005. In the top panel, the observations as derived from MIPAS are shown. The middle panel shows the simulations by the Whole Atmosphere Community Climate Model (WACCM3), adjusted to MIPAS vertical resolution by application of the MIPAS averaging kernel. The lower panel shows the difference between a WACCM3 run with and without SPE modeling, i.e. the increase of H2O2 due to the SPE. Both the background H2O2 levels and the H2O2 increase due to the SPE are overestimated in the model compared to the observations.

High energetic particles (mainly protons during SPEs) ionize the atmosphere down to the middle stratosphere and lead to production of HOx (H, OH and HO2) and NOx. H2O2 is a reservoir species of HOx formed mainly by the reaction HO2 + HO2 -> H2O2 + O2, while H2O2 + OH -> H2O + HO2 is the major loss reaction during polar night. There are a number of further reactions transforming HOx species and H2O2 into one another. The lower H2O2 levels measured by MIPAS, together with the lower OH and HO2 levels measured by Aura/MLS compared to the WACCM3 model results, provide consistently evidence that the production of HOx by SPEs, and even the background HOx chemistry in WACCM3 still have some deficiencies, similar to other models. However, it could not been clarified which of the involved reaction rates needs improvement.